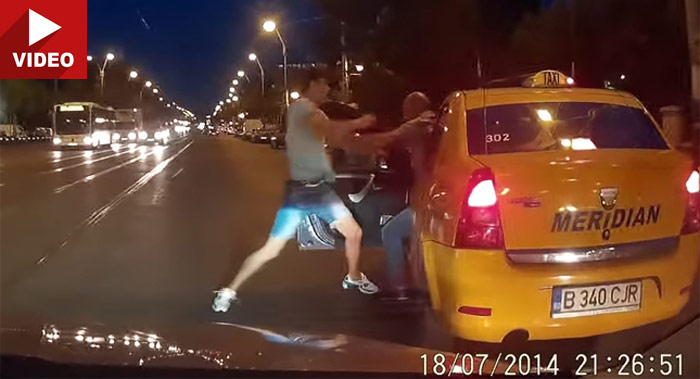 Watching the video posted below, you’ll undoubtedly wonder what on earth happened and what exactly it was that spurred the pedestrian on to chase after the taxi, open the door and being throwing punches at the driver. It seems, and we’re guessing here, that the pedestrian felt wronged by the cab driver for not having been allowed to cross the crosswalk; the taxi didn’t yield.

However, it actually does look like the taxi slows down considerably, almost stopping altogether, but then keeps on driving.

The pedestrian then chases after the car, and the fistfight commences. The considerably burlier cab driver is pinned inside the car, while the other guy keeps piling on. At one point, he seems to drop something on the ground, he turns around and bends over to pick it up – that’s when the cab driver sees his chance to get out of the car, and from then on, the tide of the battle turns in his favor.