Instant Karma Alert: Angry Driver Flips His SUV As He Tries To Ram A BMW 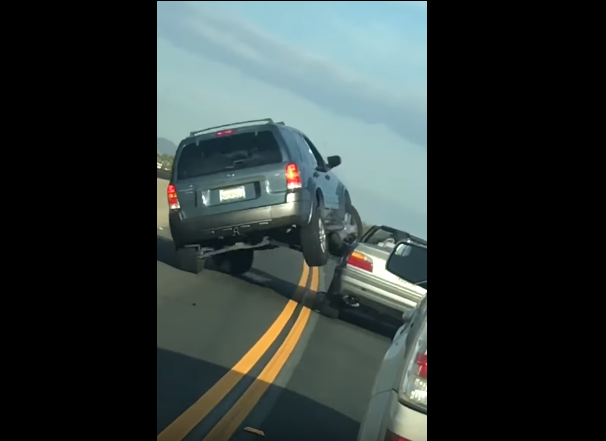 The first thing you’ll notice in this video (apart from how loud the person filming the action speaks) is the driver of the E36 BMW 3-Series convertible getting out of his car to say a few words, probably not very nice ones, to the guy in the Ford Escape.

He then, according to the woman with the camera, spits at the driver of the Escape, which is when all common sense goes AWOL as the former engages in full road rage mode and attempts to ram the 3-Series.

As you can see, that went shockingly bad, as the SUV started to climb on top of the BMW, but flipped over onto its side almost immediately.

So what was it that caused this entire mess in the first place? The description of the video gives us some answers.

“First I was recording just because he was swerving into the left lane. But as you can see it did take a crazy turn. I cannot believe I witnessed such a crazy accident. Just because he was mad he wasn’t able to cut someone off. After the incident, the convertible man took off about 15-20 feet, then parked, and decided to walk back. I was so scared and nervous, I drove off as safely as I could.”

Alright, so it sounds like the guy in the Escape tried to cut in front of the BMW, which caused the latter’s driver to get angry and… well, the rest, as they say, is history, as you can see in the following video.