Canadian Takes Road Rage To The Next Level By Threatening Family With A Chainsaw! 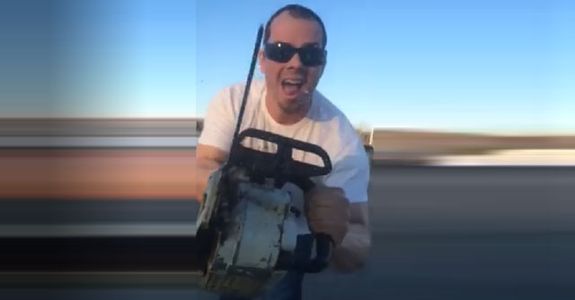 Just when you think that drivers have run out of ways to surprise us with their road-rage antics, along comes this crazy incident of a chainsaw-wielding maniac threatening a family. However, there’s a bit more to this story than what the video implies.

According to Cyr, the man cut them off and was driving erratically, so her husband followed the vehicle, supposedly to get the license plate and report the driver to the police, but they ended up at a dead end. Hermenier then parked his car to block the way of the other vehicle and that’s when the 37-year old driver came out with a chainsaw.

Cyr filmed the scene on her cellphone. “In the heat of the moment, I kept filming…. As a mother, I got very angry. I said, ‘Before threatening my children, come and see me,’” Cyr told CBC Montreal. “I think the man noticed that, first of all, I caught it all on video, and he could see on my face that I was terrorized and he saw me call the police.”

Now, we’re in no way justifying the actions of the chainsaw-wielding driver, but it’s pretty clear that Hermenier exhibited a lack of judgment, especially since he had his family, including two kids, inside the car, something he admitted to reporters.

“It was a terrifying situation,” Hermenier said. “Everyone will react differently, but I would like to say that if you see dangerous driving, do not follow the driver — the mistake that we made with two children in the back seat. We regret it tremendously. If it happens to you, pull over and just call police.”

The man has since been arrested. “He will face charges of assault with a weapon for starters … and he could face more charges,” said police