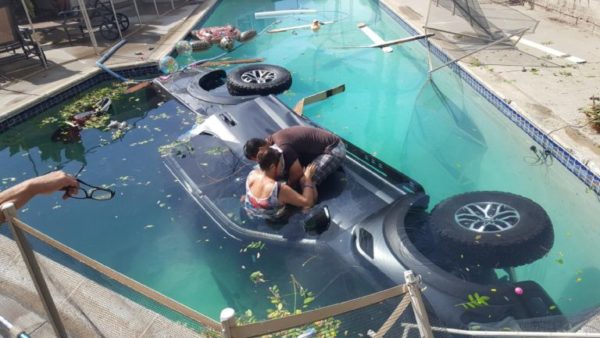 While it may be one of the most capable off-road trucks to ever roll off the Ford assembly line, it turns out the Raptor F-150 does have one weakness: it doesn’t float. An elderly California woman found that out the hard way when the Raptor she was riding in took an unexpected dip in a residential swimming pool, trapping the woman inside the sinking pickup.

Luckily for the grandmother, Gabriel Mejia was close by and saw the truck roll through the fence and into the pool. Mejia rushed over and broke out the window, pulling the dazed grandmother to safety. The woman was bleeding and will likely have some bruises from the incident, but should be back on her feet soon. She took a few moments to speak with Gabriel before being taken to the hospital, taking the opportunity to thank him and calling him her angel.

The truck was dragged out by a wrecker some four hours after the incident, leaving Faulstitch’s concrete and tile pool deck in pretty rough shape. However, that can all be replaced and repaired, while the human lives involved could not, so that’s always the priority in any situation like this. Luckily all ended well and everybody lived to tell one heck of a story.