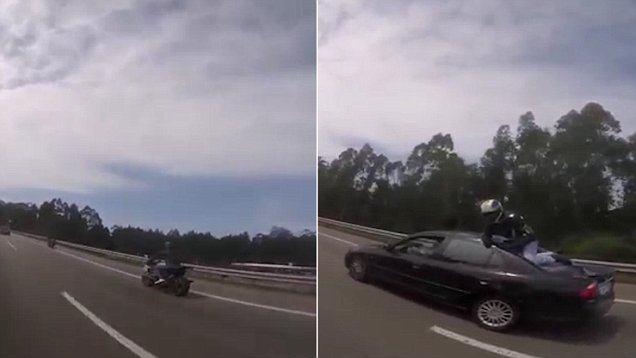 The incredible incident happened at the weekend on the A28 by a service station close to the northern Portuguese town of Vila do Conde.

The stunning footage was taken by one of the biker friends of the motorcyclist, who alerted the driver he had a man riding on the back of his car after the smash.

His motorbike was filmed flying through the air out of control before hitting a motorway crash barrier.

It wasn’t immediately clear where the biker had gone before a friend drew alongside the vehicle and videoed him with the camera on his helmet holding onto the back with his left knee poking through the smashed glass.

It is thought the motorcyclist made his potentially fatal miscalculation and hit the back of the vehicle after becoming distracted before it cushioned his fall.