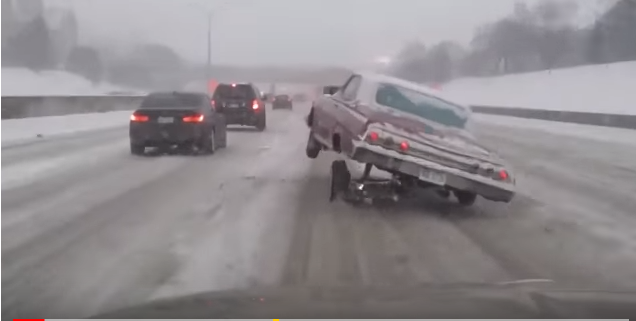 Being from the south, where a couple of inches of snow prompts days of school cancellations and general chaos amongst the populace, seeing something like this is almost foreign to me. However, up north, where they get snow early and often from the early fall to late spring, the residents know how to cope with the fluffy white stuff pretty well. In fact, they rarely miss a beat unless they get a profound amount of snow, and nearly all of the residents have years, if not decades, of experience driving in the stuff, so it’s really just not that big a deal.

However, this guy may be just a little too comfortable in the snow, no matter how much experience he has driving in it. Instead of keeping his car, a lowrider with full hydraulics for the suspension, with all 4 wheels planted firmly on the ground, this guy decided to enjoy the first snow in the Motor City and hit that three wheel motion, dropping the rear of his car almost to the ground and cocking the front end sky high, with the driver’s side wheel riding at least a foot above the highway.

While the stunt ends without incident, we can’t help but wonder how bad things would have ended if he’d hit another car with his front end so far up in the air. Seems like a sure-fire recipe for some really bad damage to us, but luckily it doesn’t matter, since he dropped the nose back to the ground and leveled out the suspension and putting all four tires back on the ground.

This is just one of many drastic contrasts between the north and south. If that was a highway in Alabama, we’d have our trucks in 4WD and be driving super carefully –well, most of us would anyway – not taking any unnecessary risks with the conditions on the road. And, if I’m being honest, a lot of us would still end up in the ditch, because we just aren’t used to this stuff. Luckily the folks up north can handle it.