THESE GUYS STOP CARS TRYING TO CHEAT TRAFFIC AND DRIVE ON THE SIDEWALK, ONE BULLY GETS BODY SLAMMED! 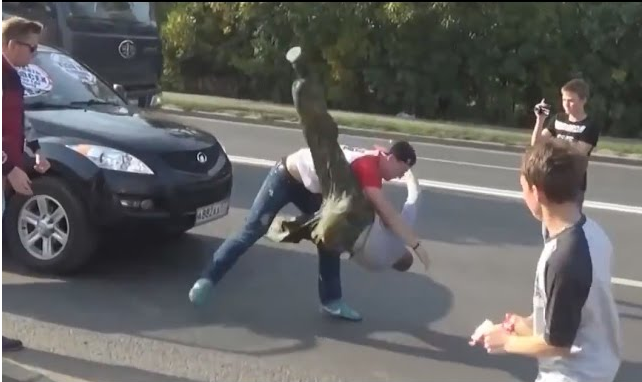 Ever since Russia fell apart, any of the institutions have been deteriorating and people have been breaking the law in accordance with their power level in the society. The ones that did not care too much about rules and regulations have started disregarding every traffic law and with it, endangering all of the pedestrians and other participants.

This has caused a new movement to be born amongst young Russians called “Stop a Douchebag”.

Their goal in society is to warn the wrongdoers about the mistakes that they are making in traffic and basically fight for the little guy.

As you would assume, the ones that are not too respective of the laws, are not too eager to respect their movement either.

So we are not surprised when some of them instead of admitting to their mistakes try to intimidate them and even fight them.

Little did they know that the guy with the ball cap is a real wrestler who goes by the name of Artyom, and lucky for the attacker will not get carried away, he simply shows him that bullying will not be tolerated with a well performed body slam.

We have to explain that we are not ones to condone violence, but since the idiot driver who was driving on the sidewalk while everybody is waiting in traffic was the one to throw the first punch, that body slam did bring some satisfaction.

Play the video and see how polite the group is, as long as you cooperate with them.