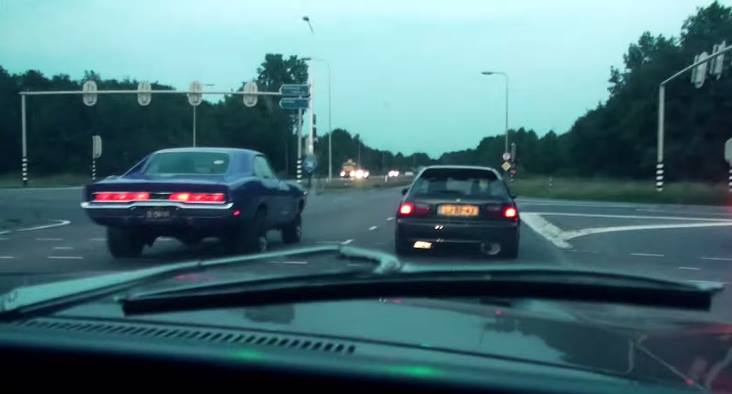 We drove with our Dodge Charger’s downtown and we came across this Honda kid when we took a break and enjoyed some food next to our Mopars.

He showed us some videos on his cellphone about how fast his Honda was and gave us a look under his hood.

His car was fully stripped and all prepped for speed.

So he challenged us, ah well ok…you got our attention.. so we drove up the the traficlights and did a little test.

My buddy in the 1970 (stock) Dodge Charger never raced before but wanted to manuel shift his colum shifter (like that’s going to work).. when shifting from 1st to second he fucked it up.. so he lost a little there..i was relax following in my 68 Dodge Charger R/T with a other friend that holds the camera.

When the race was done the guy was cewl and showed his deep respect for the old school muscles, we took him for a spin and done some burnouts and donuts.

We infected him with the muscle virus now i gues.. hehe..this movie is just for fun.. and it shows perfectly what a stock Mopar does against a new high-tech tuner..