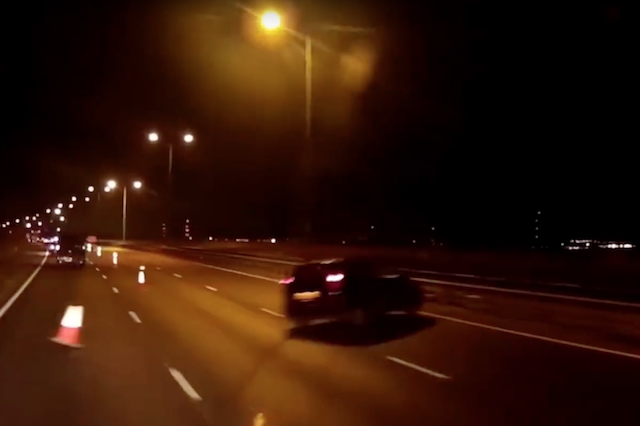 This is the moment the driver of an uninsured Nissan smashed into a barrier after losing control on the A13 near Dagenham in Essex.

The footage shows a motorists driving on the road at night. There are signs that clearly mark the two outermost lanes will end due to road works and that vehicles must merge into lane one.

However, without warning a motorist in a red Nissan Almera Tino suddenly verges at the last minute in front of the truck, narrowly avoiding a collision before spinning and smashing into the central barrier.

What’s even more shocking is that the driver of the red Nissan was uninsured and had an 18-month-old child travelling in the car not strapped in properly, according to HGV Dash Cam Footage, which uploaded the footage.

The wife of the truck driver said: “Uninsured, on a provisional licence and her 18-month-old kid in a baby seat in the back not strapped in properly.

“He checked his mirrors and saw her in the lane behind him, next time he saw her, seconds later, this happened. Fortunately they were OK but my husband would have been arrested if he hadn’t had a dash cam. This is what truck drivers have to put up with on a daily basis”.