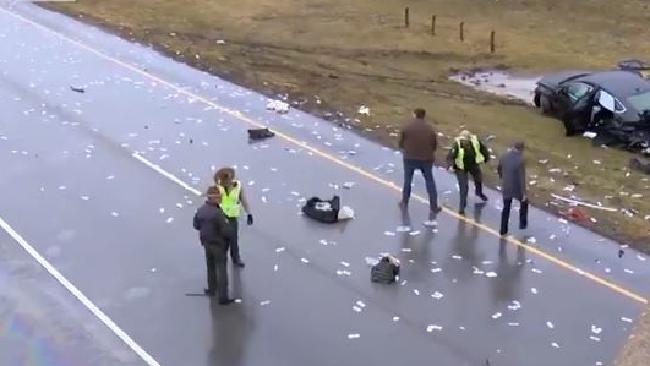 We all know gambling is a risky business, in more ways than one. Yet few of us think that even transporting the spoils of betting can be hazardous as well. Not only because you can lose your life in a car crash, for instance, but also because you can lose all that money should it spill all over the place.

Earlier this week, what appeared like your everyday crash on a U.S. Highway in Illinois turned into an exciting field day for local police. A very fast driver lost control of a car, hit a guardrail and then spun into another vehicle. A third vehicle, trying to avoid hitting the others, ended up in a ditch.

Soon after that, several meters of the Interstate got covered in $5, $10 and $20 bills. There were also some cashout vouchers spread here and there.

It is unclear how much money was scattered on the tarmac (some sources say there were several thousand dollars in the car), but police, who rushed to the scene to close the highway for more than an hour to collect all the bills, says the money belongs to a video gambling machines business.

As seen in the photos, bringing all that money back in one place proven quite an effort, given the fact that the highway was wet. Police officers even made use of brooms to clean the aisle. They did not, however, allow anyone else to help, not even the truck drivers that were beginning to pile up a few meters ahead of the crash.

According to authorities, none of the three people involved in the crash were seriously injured, but they were transported to a hospital nonetheless. It is unclear how much many was recovered or if some of it got lost or destroyed as a result of the accident.