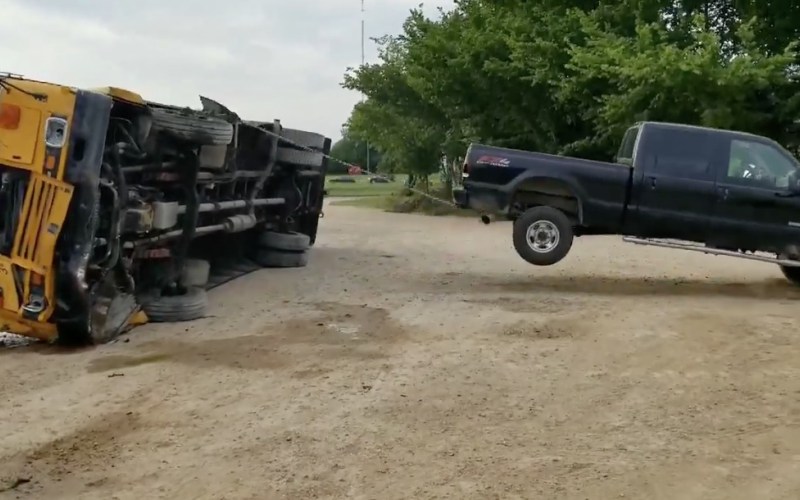 I’m not gonna lie, this video is pretty funny to watch, whether you love or hate Ford and their line of pickups. For decades, the battle has waged between Ford, Chevy, and Dodge to establish a leader in the truck market, prompting each of the big three to build ever more powerful trucks to try to win the public’s hearts, and money.

An overturned school bus, hopefully, empty of children when the turning over took place, would typically be a job for a wrecker or tow truck, but with today’s modern diesel trucks having several hundred horsepower and nearly 1,000 foot-pounds of torque on tap, somebody decided why not let the big F250 take a shot at righting the bus.

Let’s just say, it’s a bit of a struggle despite all that power and torque.

With a single chain hooked into the side, the truck’s driver first tries to just ease into the throttle and let the Powerstroke diesel muscle the bus back over onto its wheels. However, with the truck sitting in what appears to be fairly loose dirt, it simply spins the tires, not even budging the tipped transporter.

With no luck just using brute force, the driver decides to back up and let momentum work in his favor by getting a bit of a running start. I feel it appropriate to warn anybody out there that is considering trying this in the future to keep in mind that IF this chain had broken, the tailgate and possibly even the back window of this truck would be potentially destroyed. I’ve seen it happen first hand, so be extra careful when trying something like this.

The idea works, but even with the extra oomph of a running start, it still takes a couple of tries to get the bus to roll back up onto its wheels. However, you can’t deny that a regular pickup righting an overturned bus is pretty dang impressive!