Camaro Destroyed In A Massive Crash During A $10,000 Grudge Drag Race! 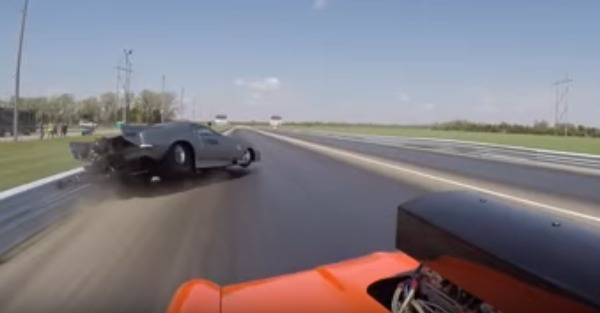 In a grudge drag race that was worth $10,000, a Chevy Camaro raced by David Hildebrand somehow took a very bad turn and swerved off the Kansas drag strip. The race was between two drag racing teams that goes by the names of Da Boogeyman from Colorado and the Honey Badger from Oklahoma. Da Boogeyman team raced with the Camaro that got completely destroyed and the Honey Badger team with a Chevy Nova. This drag race was held in order to bring an end to a heated debate started on Facebook. The reason of the heated discussion is perfectly elaborated in the video below.

After they began the grudge drag race, it was not long before the massive crash as the Chevy Camaro lost traction and brushed its wheelie bar on the Nova`s front bumper. This resulted in scraping the paint like it was making precision surgery. After counter-steering, it plunged itself towards the rail and immediately flipped upon making contact, ending up on the grass. After a couple of spectacular flips, the Chevy Camaro driver fortunately emerged unscathed from the wreckage. However, the damage was definitely and the Camaro is completely destroyed. Fortunately, the Camaro was equipped with all kinds of safety devices that saved the Camaro`s driver`s life. Do you ever wonder how many cars were destroyed during the Fast and Furious shooting? Here`s your answer!