This sight should get any car hunter’s blood going. A real barn with real muscle cars inside – 3 Pontiac GTOs to be exact! Apparently a GM engineer started collecting cars right around the time the fuel crisis hit. That meant he was probably able to pick up fuel-inefficient cars like these for a song. Supposedly he stashed them in buildings all over the area. The current owner stumbled across these while out car hunting and presumably purchase them all.

GTOs are sought after by many Pontiac enthusiasts today, so the idea of finding a barn full of goats is an exciting one. This barn contained 3 examples (1964, 1966, and 1968) and after sitting in the Missouri backwoods for 40 years, they are all in need of some serious help. No mention is made of the other cars so they might still be sitting out there or perhaps the seller has other plans for them. We will keep an eye on his account to see if they show up, but for now we will have to focus on the ’64. 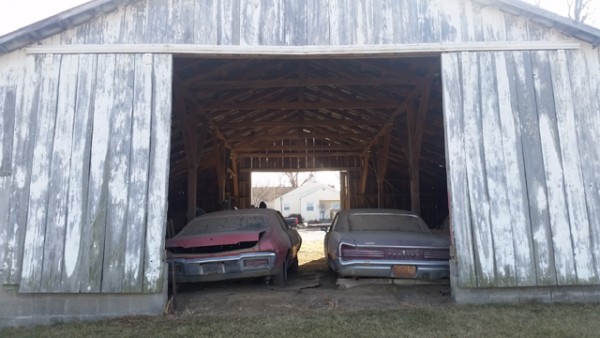 This car doesn’t have an engine or transmission and although the seller claims that it has a “straight and rust free body”, I can see evidence of a few botched repair jobs. New sheet metal has been welded in here and there and bondo has been applied liberally over that. That doesn’t necessarily mean that this car isn’t worth saving. All the parts needed to bring this old goat back to life are easily available and relativity cheap. The restoration won’t be cheap or easy though, but it might be worth it in the end.

Much of a muscle car’s value is dependent on that all important options list. Engine and transmission selection can make or break a car like this and lucky for the seller, it was well endowed. The first GTOs were Pontiac Tempests outfitted with a GTO package. The package included a 389 V8, 3-speed manual, heavy duty suspension and a few other visual enhancements. This car was also optioned with the Tri-Power setup (three 2-barrel carbs) and a 4-speed transmission. Add in the black over blue color scheme and you had quite the street racer! Will it be worth the time and effort needed though?