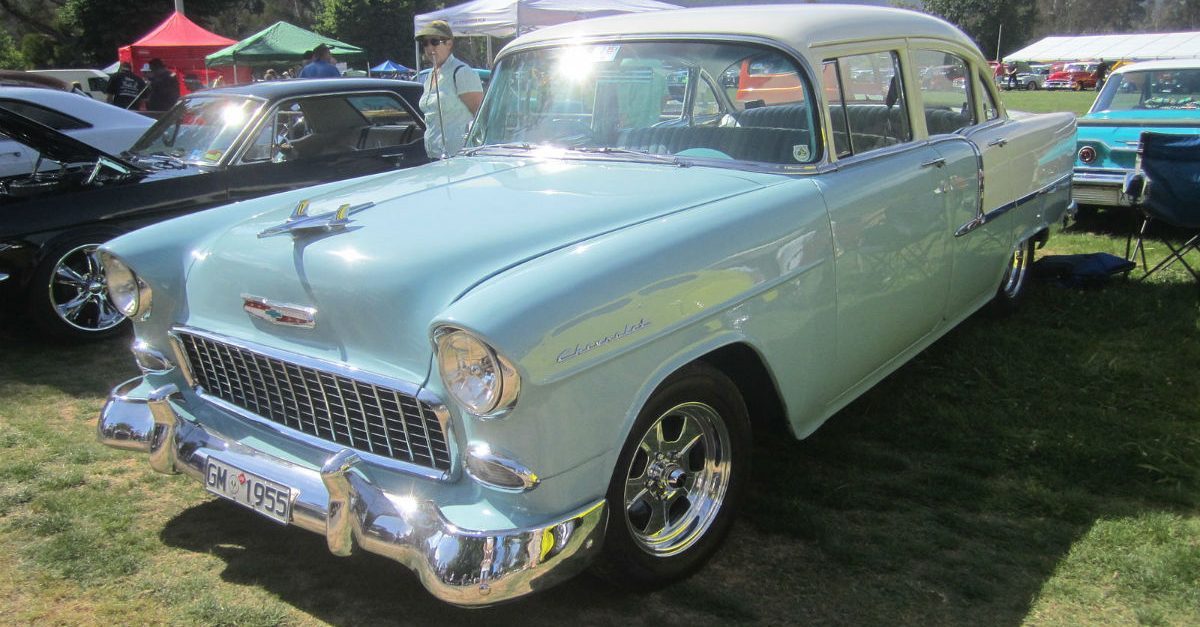 Though somewhat overshadowed by the Chevrolet Bel Air series these days, the Chevrolet 210 still represents a quality two-door series from Chevrolet and is a desirable mid-1950s vintage model for car collectors. Just ask Bill Sharkey.

The Australian man spent a whopping 21 years building a 1955 Chevy 210, and you could say the entire endeavor was something of a dream project.

“I’d wanted a ’55 since I was a young fella,” Bill says, a panel beater by trade. “I couldn’t afford the car I wanted so I went looking for something I could afford.”

That search took Bill to South Australia where he found a bare rolling shell at Joe’s Golden Gasoline Classics. It may have fallen into Bill’s budget at the time, but it was missing everything and it was carrying plenty of rust, too.

Luckily, Bill could handle all that kind of work himself and he got busy in his spare time cutting out the cancer from the doors, sills, fenders, floorpan, and trunk. When he wasn’t repairing the rust he was scouring catalogs from Danchuk and Classic Industries, making lists of all the myriad parts he’d need to build a complete vehicle.

Thanks to a buddy sending him a few parts and a couple parts’ runs of his own, Bill was able to scrounge together a number of the necessary parts — including a firewall, floor section, right-hand-drive dash, and even a complete chassis — that he needed to complete his two-door sedan restomod job.

Bill clearly had the skills to get the job done. So why did his 1955 Chevy 210 project take so long to finish?

Life—and a couple of other personal build projects—got in the way of the project for a handful of years before Bill returned to the ’55. Around the end of 2015, Bill and wife, Penny, decided to draw a line in the sand and set a solid completion date for the car. This gave them just over a year to get the car done, just in time for Summernats 30 in January 2017. 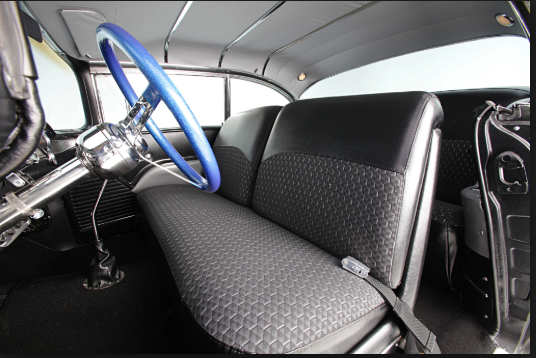 One part of the build that didn’t change with the passing of numerous stylistic fads was Bill’s choice of color scheme. Even 20 years ago he had a clear vision for how the car would look.

“I’d seen this combination of PPG Vivid Yellow and Cream on a vintage Harley-Davidson and thought it would look good on the Chevy,” he says.

With a solid deadline in front of him, Bill worked with his friend Trev Hutchins to put together the 400ci small-block engine which, according to Hot Rod, was “filled with Scat rotating guts along with SRP pistons and a Crane cam tickling a set of Jesel rockers” and “topped with a Weiand 142 roots blower and a Holley 750 XP carb.” That small-block engine combination along with a Turbo 400 and 9-inch with 31-spline axles, Detroit Truetrac LSD, and 3.50 gears meant that Bill’s Chevy 210 would be more than just something that looked good parked out front of his house.

Once there were only six weeks until the deadline, Bill really kicked his building regimen into gear, working in his shop from 4 a.m. to midnight most days as he worked to complete other customer projects as well. The last thing he finished up was the interior of the Chevy 210. While his trimmer friend Shaun worked on the seats and installed the door trims and BMW carpets, Bill handled the roof lining and a few other odds and ends.

It came down to the wire, but Bill was able to get the Chevy 210 finished in time for deadline and take it around for a quick lap at Summernats. Before he takes it on regular cruises, Bill plans on making a few more tweaks, but if you want to see what Bill ended up churning out after 21 years, you can check out some high-quality photos of the finished product here.

It may have taken Bill longer than most DIY car modification projects take, but we’d be lying if we said this Australia native didn’t do a damn fine job recreating this American classic. What do you think?