7-Year-Old Records Message To Bully On Facebook, Then Bikers Knock On Her Door To Protect Her

Ashley Wastakiewicz is a first-grader and an animal lover. The 7-year old has been dealing with an 11-year old bully for more than a year. 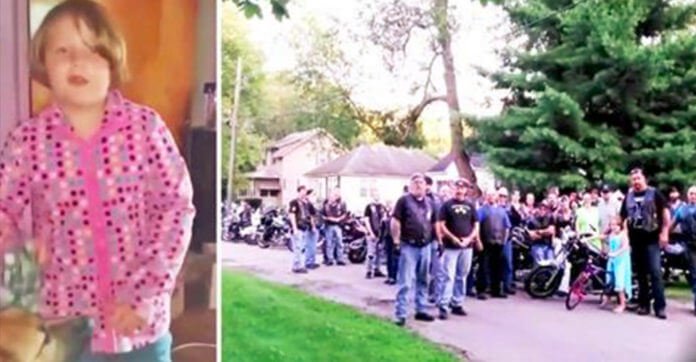 Things have gotten so bad that Ashley is afraid to go outside and play. She had spent most of her summer vacation in the house to avoid being bullied by the boy.

Ashley’s mom, Christine, said her daughter feels alone and that nobody loves her. The bully beat her up so badly once that she ended up in the hospital.

Charges were filed, but the bullying continued. Christine created an anti-bullying Facebook page and called it “Justice For Ashley” to try and get some support for her daughter.

Ashley even made a video in which she said: “Please, stop bullying.” But no one could have guessed who showed up to show their support.

James Dingmon, a member of American Veterans Motorcycle Club of Jackson, saw the post, and he responded.

Dozens of members of the local motorcycle club came to Ashley’s home and showed support for Ashley. Dingmon said that no one should ever be bullied.

They also offered a little bit of intimidation too! We have heard stories about how these guys and gals have a soft spot for children who get bullied.

The bikers walked Ashley up and down her street and paid a visit to the bully. She rode her scooter and said that she wasn’t afraid anymore!