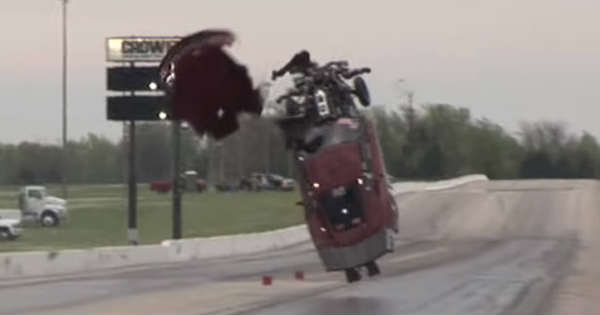 However, within seconds after the launch, everything went sideways. When both of these monsters started the race, both of them lifted their noses. However, while the Camaro soldiered on, the 4.000HP Corvette kept lifting. The front aerodynamics of the racing monster eventually tears apart and this happens when the monstrous C7 takes flight while performing the most insane 200 mph wheelie you`ve ever seen. It flew high in the air over the center of the drag-strip and crashed heavily in the other lane. Up next, it went sideways down the drag-strip, shedding all kinds of parts in the process.
The stricken racing monster somehow managed to eventually pull to a stop in the lane it started. Fortunately, Daniel Pharris managed to escape this incident without any serious injuries. Surprisingly, Daniel Pharris managed to achieve a pretty solid time that`s 4.6 seconds at 226.9mph. This is not bad at all considering that his car was most of the time either traveling sideways or in the air.