1968 Pontiac GTO Comes Out of Hiding After 40 Years 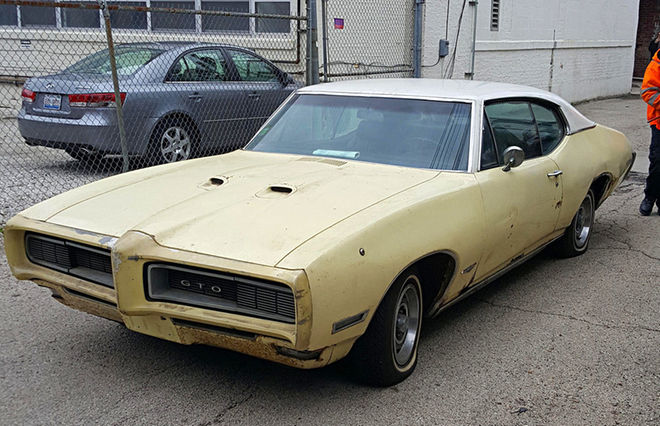 This is what Justin Hadad saw when they opened the garage door to a 1968 GTO parked in this Chicago neighborhood since 1979. He said finding this GTO was a “once in a lifetime opportunity.”“She told me she was asking seven grand. I went down the next day with cash in hand. We picked it up with a tow truck a couple days later.”

Justin Hadad’s 1968 GTO acquisition had been seven to eight years in the making. A family friend, Diane, was the longtime caretaker for an older neighbor named Harvey. After Harvey’s wife died, Diane would go out and talk to him about the GTO when Harvey would be cleaning the car.“When he passed away, he left her the house and everything that was in the house and garage. In the garage was this 1968 GTO.”

Diane wasn’t ready to sell the car initially. Justin mentioned to her that one day he’d like to own the old Pontiac. What made this one all the more interesting was that Harvey had purchased the GTO brand new from Bartell Motors in Cicero, Illinois.

“I had always wanted an older muscle car. My buddies have Chevelles and older Camaros,” Justin tells us.The young man knew about GTO Judges. He wasn’t sure about a regular GTO, so he looked up some pictures and “kind of fell in love” with the 1968 model.

Not until Diane decided to sell did Justin get to see the old Goat. Cash in hand, his emotions were running high as they swung open the door of the single-car garage in an old neighborhood in Chicago. He had no idea what to expect other than what Diane had told him: The Pontiac was a 1968 model GTO two-door hardtop with a stick shift.

Justin said he was “beyond excited.” That excitement grew as they moved boxes and stuff out of the way and lifted a tarp off the body. There before him was a real GTO obviously untouched, wearing the original paint and needing minor bodywork. Justin found a few rust spots. The tires “held air to an extent.” The major selling point was a “mint” interior looking “like nobody had ever sat in there,” he says.“I pulled my truck in the alley and hooked up jumper cables. We tried to start it, but the battery was too far gone.”The GTO had been sitting since 1979. Justin found a license plate sticker reading May 1981 that was never put on the car.

“We ended up towing the car over to my mechanic to get it checked out. It just needed a tune-up. With new spark plugs, new wires, a water pump, timing chain, and retuning the carburetor, the 400 started up and ran strong all the way to redline. The rear main seal is leaking and that is pretty much it.”Justin plans to keep the GTO in his family and pass it on to his kids one day, if he ends up having kids. 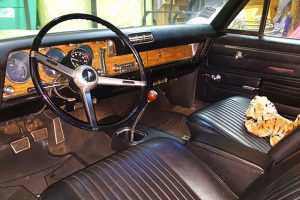 The interior was sharp with no rips or tears in the original black vinyl bucket seats. The original owner added the tachometer and converted the ignition to electronic. The odometer read 51,843.

Harvey told Diane stories about his beloved GTO. One story is he got this stuffed tiger the day he bought the car. Justin found the tiger sitting in the car on the package shelf under the rear window. The tag on the stuffed toy reveals “Dardanelle” out of California.The last time Harvey had the car on the road, in 1979, he got side-swiped on the right rear quarter. He put the car in the garage and never drove it again.