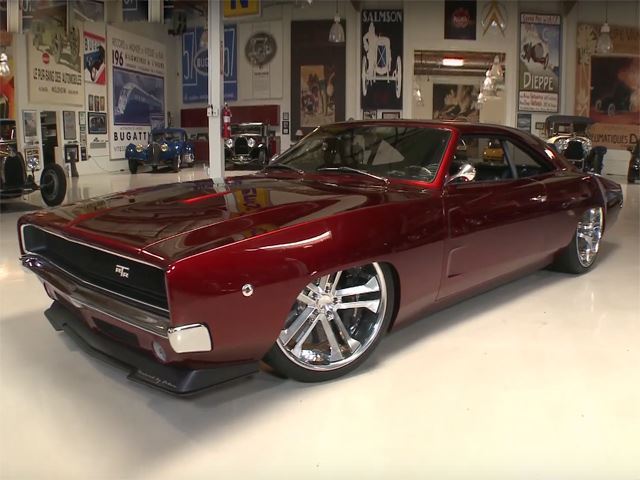 Of all the countries that would be obsessed with American Muscle, we wouldn’t have guessed is would be Sweden. It turns out that the car scene there is full of classics from the 50s and 60s. With long and cold winters, this gives the Swedes lots of shop time to build and tune. The end result sometimes comes out like this rather impressive 1968 Charger. A Volvo Salesman, Johan Eriksson, is the car crazy mastermind behind this beautiful classic.

One of the most noticeable changes made during the restoration and modification process is the engine. The V10 heart of a Viper beats under the 1968 Charger hood with help from twin turbochargers. All in all, this classic is now turning out 1000 horsepower. It has become such a popular draw that it is pulling the attention of enthusiasts and fans across the globe.

One such admirer is Jay Leno, the late night talk show host who also loves classic cars. He loves them enough that his collection has its own show, Jay Leno’s Garage. With the 1968 Charger making a grand debut at SEMA 2017 in Las Vegas, even the well known star had trouble getting close.

Johan Eriksson and his car get to be on the show for a meet and greet with the star as a result. When an accomplished builder and a superfan collector get together, the has to be a tour and test drive. Whether you’re a die hard Mopar lover or not, it’s hard not to stare at this perfectly modified restoration.

Check out the video below for a full rundown on the work it takes to make a car this beautiful. There’s plenty of track and road driving sequences as well so you get to see this 1968 Charger in motion. Let us know what you think of Eriksson’s handiwork that makes this classic a modern head turner. As it turns out, the Swedes have a lot more on their minds that making automobiles as safe as possible.