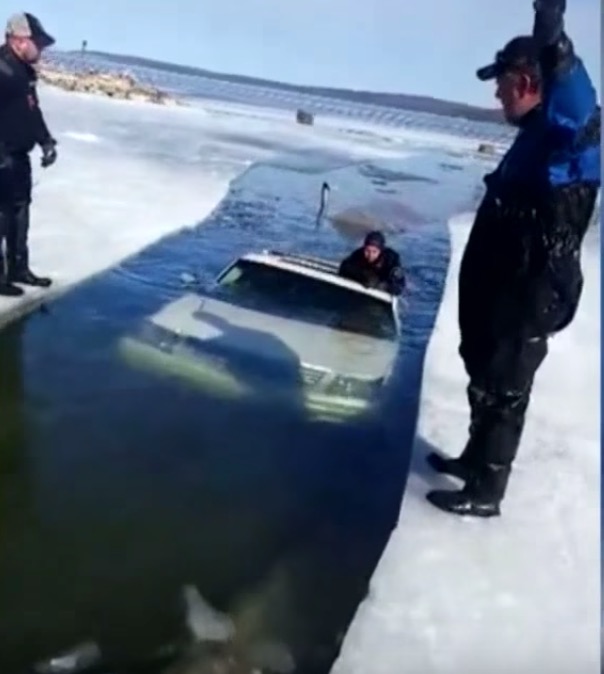 Ice fishing is one of those things that I think I’d rather watch over here from dry land, you know, where there’s plenty of heat and absolutely zero chance that I’m going to fall through the ice to a new dose of hypothermia that most certainly lies below. I mean, when it snows and I have to go outside and clear off my windshield, that’s plenty of cold for me so I couldn’t imagine being tied up in a situation like this one, out in the middle of a lake, when this Escalade would prove to be just a little bit too much for the surface tension provided by the ice beneath it, ice that they thought was plenty thick!

This time, we check out someone who was braver on the ice than most would be and they ended up paying the price as the driver skated across the surface of the water and ended up going down hard as the ice refused to support the weight any longer and swallowed up the Cadillac Escalade whole! At first, the truck goes down about half way up the door, levitating in place before it starts to sink in a very Titanic-esque fashion. It’s kind of hard to watch as the truck that looks to be a nice and comfortable warm ride begins to submerge itself into that frigid and icy water!

Check out the video below that shows the moment that the truck goes down like a load of bricks when the surface of the ice cracks in a worst case scenario. This most certainly isn’t how you’re going to want your ice fishing experience to end. There’s no way that they saw this one coming, but I would be willing to bet that next time, they’re going to try and avoid this at all costs, potentially by choosing a slightly lighter vehicle.